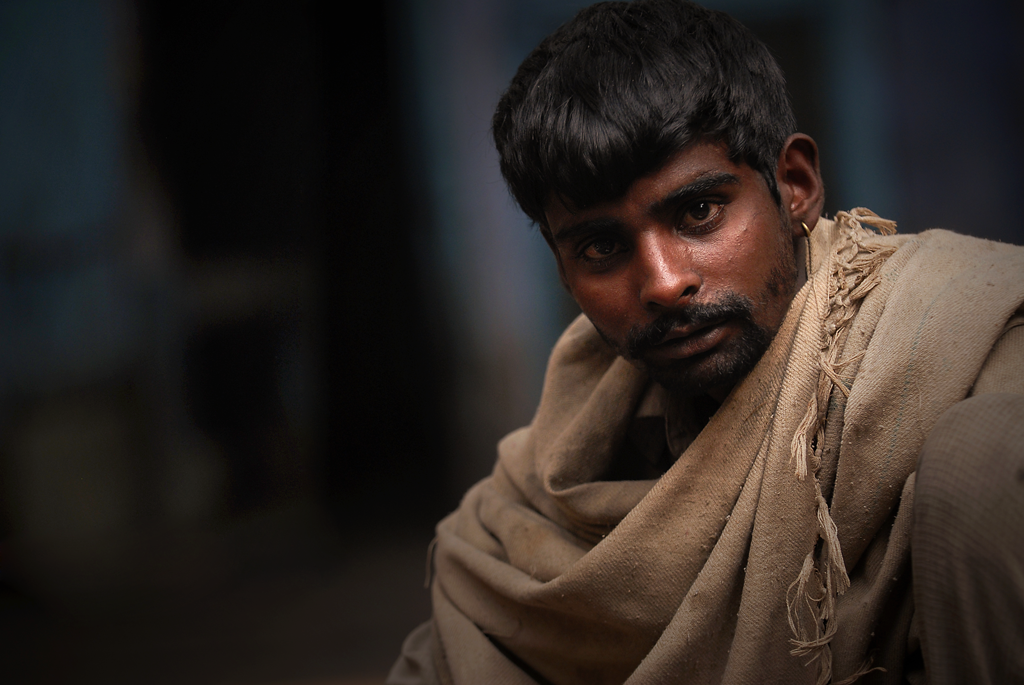 The photographer prefers engaging with people openly, and sharing my story and my need for a picture. He finds that in most cases people are more than happy to share their story, and to be heard. He too, walk away more culturally and emotionally enriched with the experience. However, if someone expects money for a photograph, then the decision becomes less of whether to pay and more of whether to take the photo. That is a judgement call that each of us needs to make on a case-by-case basis, while being mindful of the example we are setting for future travelers and photographers.

In a series of pictures the Dilliwalas of Delhi with 25 million people have been pictured by travel photographer Kristian Bertel at almost every street corner of the sprawling city showing the diversity of the people of Delhi. Delhi is said to be one of the oldest existing cities in the world, along with Jerusalem and Varanasi.

Chaotic growth in Delhi
The case of urban poverty in India has been exemplary in terms of mismanaging or not managing at all urban growth. Cities like Delhi have become the best place to foster poverty and destitution at a scale and extent unseen before. Rural poverty is one thing, but urban poverty in India added a whole new breed of revolting aspects to it such as diseases, violence more than at the countryside, disintegration of communities and the social fabric. But building and increasing the size of cities obviously costs billions and India was somewhat short of cash at the time. Consequently, it has decided to radically reduce the public services it offers as well as its investment in infrastructure. You might think 'Okay, but they were broke', but this is where strong political will makes a difference, considering that other countries in the same situation managed very well their transition despite a few controversies. 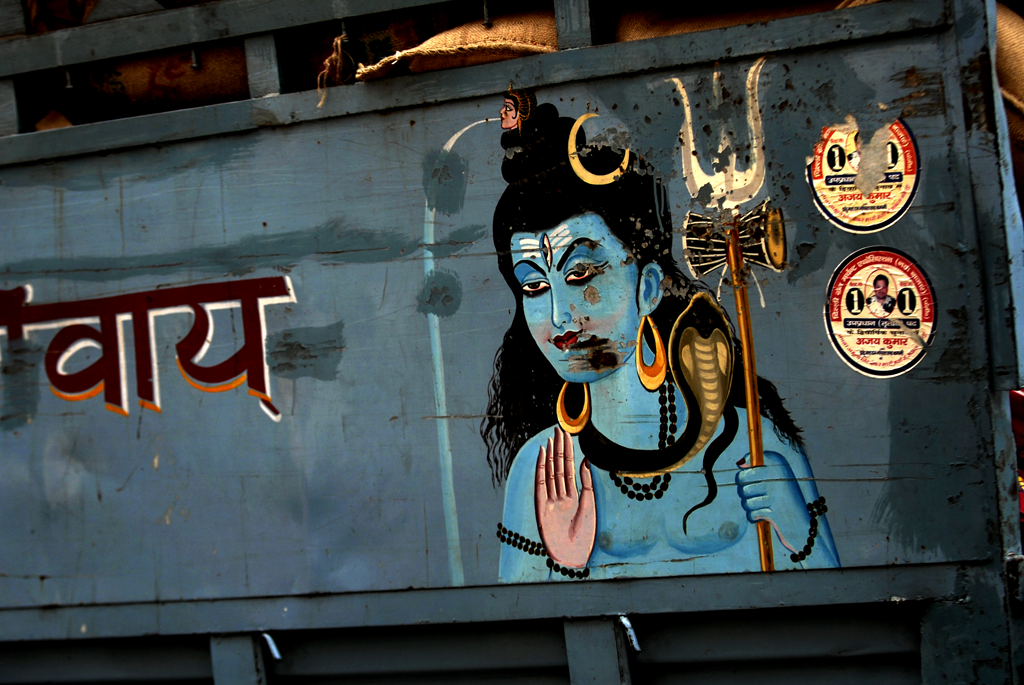 Invest time before traveling to research the customs, and photography norms of the place you will visit. Customs vary not only by country, but by region and religion as well. Understand and appreciate the diverse cultural context, and be respectful of these differences. A little research prior to your journey, goes a long way in avoiding disappointment and despair when you find out that certain photography restrictions exist in the places where you are traveling.

Getting around in Delhi
Getting around Delhi is always an adventure. Traffic is, by and large, horribly congested and many drivers will think nothing of quoting ten times the going price to a tourist. Use the prices below as broad guidelines, agree on prices before setting off. Best way to travel is via metro, where there are separate cabins for women that prove to be very useful during rush hour. Metro is clean, efficient, and typically ridden by relatively affluent middle-class students or commuters en route to and from work, there is almost nowhere in the city that you cannot get to by metro. Much of Delhi is quite pedestrian-hostile. Distances are long, road signage is poor, and in the more tourist oriented areas, you will be constantly accosted by beggars and touts. Crossing roads often involves wading across multiple lanes of heavy traffic. Try your best to move in a predictable straight line, so vehicles can weave around you. Better yet, latch onto a group of locals and cross in their shadow. Delhiites complain about many things in their city, but the food will satisfy even the most demanding gourmet. Not only can you find some of the best Indian food on the subcontinent, there is also an increasing number of excellent if often pricey international restaurants offering cuisine from around the world. When ordering, do remember that Delhi is about 1,000 km from the nearest ocean, so vegetarian, chicken and mutton dishes are the way to go. 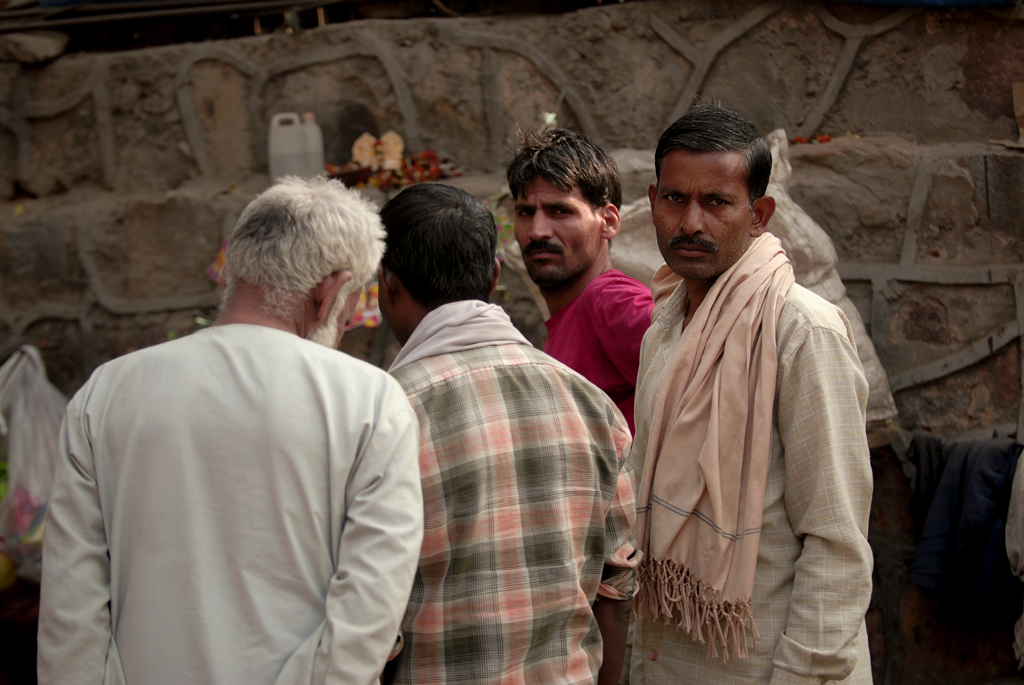 Self confidence, an open attitude, and a genuine smile, are important wherever you travel. People will generally respond to you with the same attitude that you show them. Be open and honest about your need to photograph something or someone, and more often than not, people will respond positively to you even though they can be sceptical in the beginning.

Traveling in Delhi
Many first time travelers to India find themselves falling victim to scams and touts, and unfortunately Delhi has a lot of both. Be on guard for anybody trying to help you by giving you unsolicited directions or travel advice. Do not believe the advice of taxi and auto drivers. If this is your first time to India, do not openly admit it, as this will make you more vulnerable to touts. "- I have found that most people love to have their picture taken. If you are uncomfortable or nervous about something or someone, it's best to just leave the camera in your bag. Sometimes use your camera as an ice-breaker. Take a picture and show people the photos you've taken of them, and you will find that photography instantly becomes more fun and less intimidating. More than anything, respect the fact that 'No' really does mean NO. Yes, I understand that there is another school of thought of whether asking for permission will ruin the composition of an image. And while a lot of photographers will argue one way or the other, I am of the opinion that if you are taking a picture of a person, you should make every effort to ask permission either before or after", the photographer says. 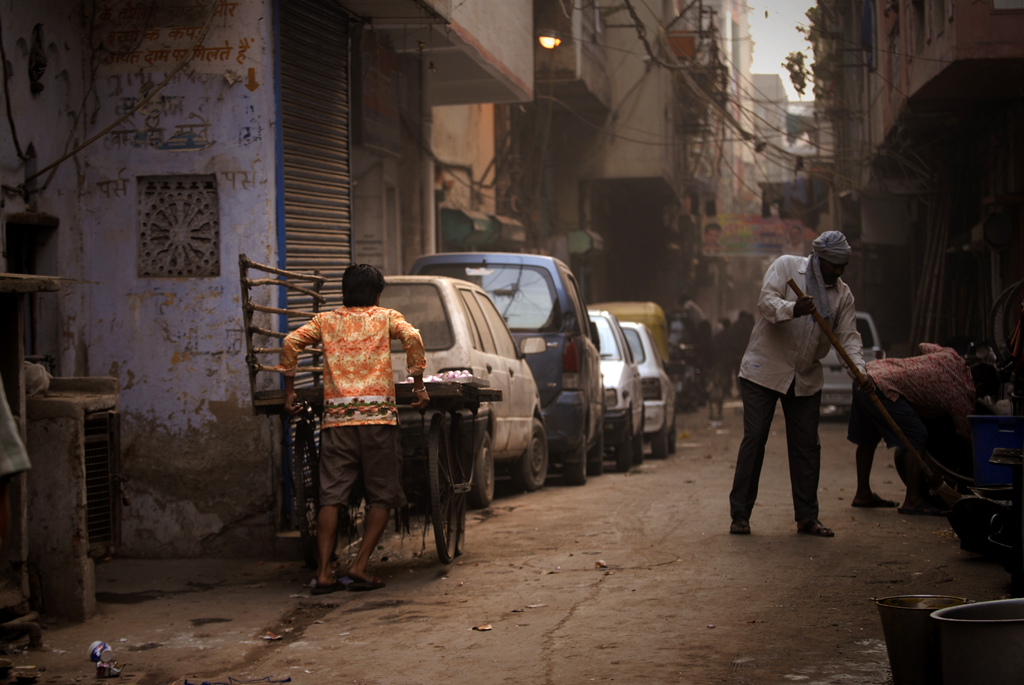 Take the time to really travel without obsessing over capturing every minute of every day with your camera. Spend time exploring your surroundings, and your body and mind will thank you for it. Even if you are on assignment, build in some down time to your schedule. Not only does it help you relax, but also recharges those creative juices so you are more productive when you do get back to work. This one is one of the basics of photography, no matter what your genre.

Languages in Delhi
The native language of the Delhi area is Hindi, which also happens to be the main official language of the Union Government. However, for official purposes, English is more widely used than Hindi. Almost everybody you meet will be able to speak Hindi, quite often with the Bihari and Punjabi accents. However, most educated people will also be fluent in English, and many shopkeepers and taxi drivers will have a functional command of English. Punjabi and Urdu are also official languages, but they are spoken much less widely. The Hindi spoken in Delhi is quite Persianized, similar to the Hindi spoken in Western UP and much less Sanskritized than the Hindi spoken in MP. Signage is usually bilingual in Hindi and English, but some road signs especially in South and Central Delhi are in Hindi, English, Punjabi and Urdu. 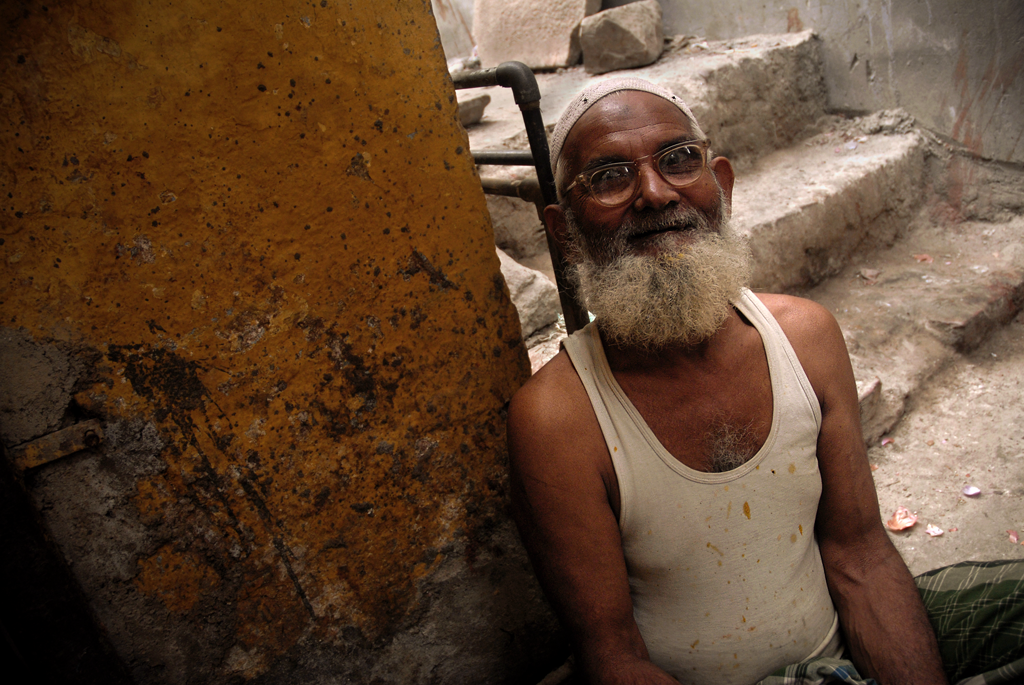 Even beyond the obvious need to really experience a place, is the question on when is it okay to take photos of people and places, especially when traveling to other countries? Many times there are major cultural, social and economic differences between the photographer and the subject being photographed. Perhaps the best way to answer that question is that responsible photography is very much like responsible travel. Armed with a thorough knowledge of the place, an interest in cultural enrichment, an open mind, a pleasant attitude, some common sense and a smile, photography abroad just like travel itself can be a very fulfilling experience.

History of Delhi
With evidence of continuous settlement dating back to the sixth century before Christ, Delhi is one of the oldest inhabited cities in the world. The legendary city of Indraprastha from the epic Mahabharata is said to have been situated where Delhi now lies. Thought to have been built and destroyed eleven times, evidence of at least eight distinct settlements can still be seen in Delhi. Legend estimates it to be over 5,000 years old. Over the millennia, Delhi is said to have been built and destroyed eleven times. The oldest alleged incarnation of the city shows up in the Indian mythological epic Mahabharata as Indraprastha. 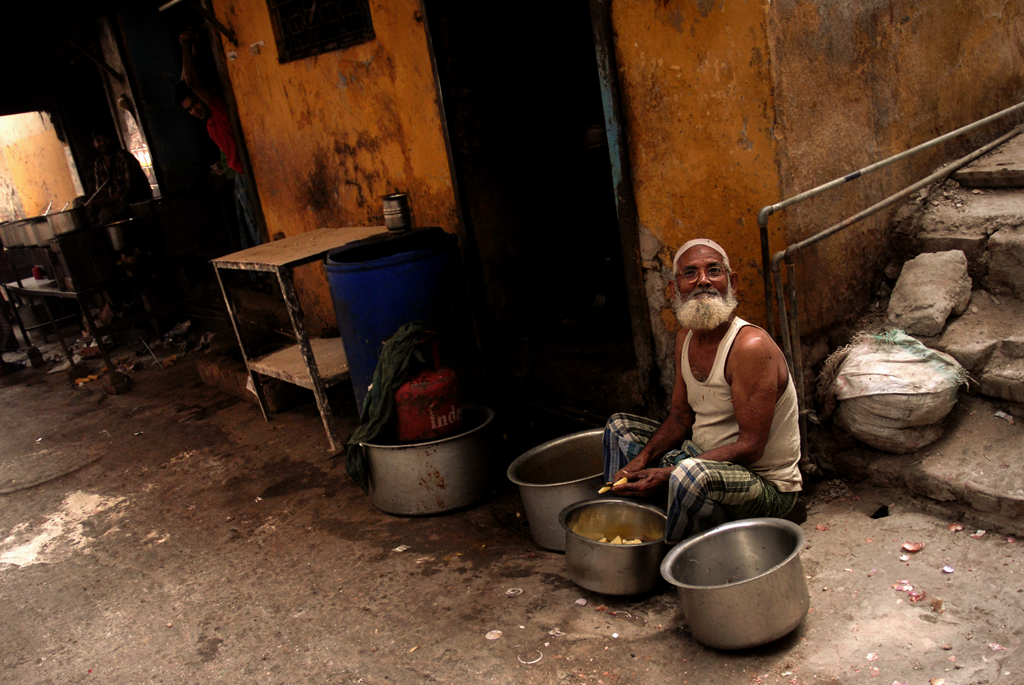 Delhi has arguably the best street food in India. However, do not eat unhygenic or open food. There are plenty of restaurants offering street food in a potentially more hygenic environment but still the best taste is found in the streets.

Thoughts on travel pictures in Delhi
Perhaps, one of the most controversial situations while traveling abroad, is the question of giving money to people you photograph. There is always that one uneducated, desperate tourist who gives money to get what they think is an award-winning prized photograph, and soon it becomes a lucrative business in the local community. This can get quite uncomfortable and unsafe for other photographers traveling through the same places. As a photographer you can ask yourself what your thoughts are on this topic and if you do ask for permission before taking photographs of strangers when you travel. Or do you just take the picture and move on and what other things to you take into consideration to be a culturally sensitive travel photographer. You should know the workings of your camera inside and out. When you are traveling and have strangers pose for you, that is not the time to start trying out different settings and fidgeting with your gear. People begin to loose patience and often get leery of you and your abilities. They are more likely to simply walk away, rather than waste their time with a stranger who does not know how to operate his/her camera.

Taking pictures in Delhi
There is a little wanderlust in all of us. Everyone, at some point in their lives, wants to travel the world and experience all its beauty for themselves. Travel opens the mind to many different possibilities, and makes us more tolerant and conscious as humans. What might be simple, normal, and mundane to some, might be unique, challenging and exciting to another. As photographers, travel and photography are very much intwined. Photography is a way to capture and communicate the sense of place and people. Our images help immortalize our experiences in travel. This is particularly important when we travel to places outside of our cultural comfort zones. Every moment and every experience is new, and the need to document and preserve them sometimes takes over simple basic common sense. "- I admit that there have been times when all I've done is experienced a place or an event through the back of my viewfinder. My camera has been strapped to my person like my life depended on it, and I have always come back feeling less than happy. The fact that I missed all the little nuances outside the line of vision of my viewfinder, weighs quite heavily on my mind", the photographer says.

Pictures online
Danish photographer Kristian Bertel (b.1980) is recognised as an image-maker and his pictures are online a lot of places. This illuminating new series of photos from India will tell the stories of the people living in different communities around India, through Kristian's beautifully arresting, color photography. For further information, please:
Contact the photographer